Instead, we have been confronted with destabilising current account deficits in Greece, Spain, Portugal, Ireland and Italy; housing bubbles in Ireland, the Netherlands and Spain; and current account surpluses in Germany and the Scandinavian countries. It is plausible to assume that the low interest rates that came along with the euro have contributed to slowing down welfare reform in countries with passive and insider-biased welfare systems and labour markets.

Paradoxically, the current account surplus countries, such as Germany and the Nordic countries, more concerned with competitiveness, intensified the social reform momentum after the s. Over the past decade it has become increasingly clear that the high-tax, high-spend economies in Northern Europe have performed better on most Stability Pact and Lisbon Agenda indicators than even Germany.

This underscores the fact that European polities can afford high levels of social protection, if social protection and investment are both well-organised and efficient. We do not want to suggest simple and one-sided causalities, but it appears that notably Southern welfare states are comparatively inefficient both in terms of social protection and in terms of social investment. Figure 1 summarises an argument developed in Vandenbroucke, 6 leading to the conclusion that, given their level of social spending, Spain, Greece and Latvia are comparatively inefficient with regard to poverty together with Portugal, Italy and the UK, if we apply less strict criteria to define comparative inefficiency.

Figure 2 and 3 not only illustrate the particular deficit of Southern welfare states - compared to other EU15 welfare states - with regard to education and employment; they underscore the huge education agenda confronting the whole EU. More than one in three Spaniards in the to year-old age cohort have no more than lower secondary education; in Germany this applies to less than one in six young people.

Vandenbroucke 8 argues that the educational disequilibrium within the eurozone may be as destabilising for the long-term future of the eurozone as the pension disequilibrium. Or, to formulate the argument more precisely, if it is correct to assert that pension ages in all eurozone countries should be tied to life expectancy in a more or less similar manner, for reasons of symmetry across EMU, then the same reasoning holds for educational attainment.

This observation comes with a big if. The extent to which the economic symmetry required for a currency area to be sustainable necessitates convergence in retirement ages or other social parameters is disputable. The underlying argument raises complex cognitive and normative issues. But it illustrates the fact that in a currency area a basic consensus is needed on those arguments.

In other words, a basic consensus is needed on the social model that is compatible with the EMU and the scope and degree of convergence necessary to sustain it. Source : Own calculations based on Eurostat data. Today much attention is paid, and rightly so, to short-term conditions for the sustainability of the EMU, notably the need to establish a degree of banking union. Here we focus on a longer-term perspective. Members of a currency union face interrelated trade-offs between three fundamental economic conditions which determine its sustainability: symmetry, flexibility and the possibility to organise budgetary transfers among members.

The aim of such budgetary transfers is temporary stabilisation of the currency union as a whole, not redistribution from the richer to the poorer regions: it is no free lunch to sustain diversion from average economic development across the union for long. However, the EMU cannot do this under its current institutional mandate. What the eurozone can do is to pursue a strategy of preventive monitoring of national budgets and wage developments.

This is what the EU currently tries to achieve through the "six-pack" and the new "fiscal compact". A currency union, in other words, does not per se have to be a unified superstate, but a basic consensus on the trade-off between symmetry, flexibility and the availability of fiscal support is imperative. How strong both supranational and domestic political institutional capacities are to redress destabilising divergences through intrusive monitoring and surveillance, how far member states are willing and able to go in terms of internal flexibility, what kind of flexibility is to be pursued, and under which conditions member states are willing to temporarily support each other through stabilising budgetary transfers - these are by no means politically neutral choices.

In the current context they constitute the fundamental choices determining the European social order. On the other hand, it is not a priori evident that far-reaching social harmonisation is required to guarantee economic symmetry.


There are different avenues through which domestic social policy can support symmetry in macroeconomic outcomes. These complex issues are to some extent open-ended - as is intrinsic to any set of trade-offs. But, however complex and open-ended, these issues cannot remain unresolved.

We badly need a Europe-wide consensus on the fundamental cognitive and normative arguments that determine at which point in the trade-off between symmetry, flexibility and transfers European governments would wish to position their welfare states. In other words, we need a consensus on the basics of the European social model. Clarification of what "a social Europe" really means was often viewed as a fair weather goal, but it is rapidly becoming imperative, exactly because of its macroeconomic repercussions.

Admittedly, reaching such a basic consensus is fraught with difficulties. To what extent can "internal flexibility" be married with social securities and capacitating welfare services, in terms of minimum wage, employment relations and migration? Are budgetary transfers effective, or should we fear their misuse by profligate governments delaying structural reform? On which issues do we believe social convergence to be imperative for the stability of the EMU, and to what extent? Moreover, such a shared consensus has to address a complex issue of reciprocity.

Jean Pisani-Ferry 10 argues that the issue of adjustment in the Southern countries cannot be treated as a one-sided process. To the extent that there is common interest in successful adjustment, the burden has to be shared. Northern member states should temporarily accept somewhat higher inflation to make price and wage adjustments in Spain realistic, provided that price stability across the eurozone as a whole is maintained and that Spain uses this leniency to continue structural reform. Northern European governments must avoid austerity overkill, according to Pisani-Ferry. They should accept wage settlements significantly above those observed in the first decade of EMU including higher minimum wages in Germany, we would add.

This rational economic policy argument illustrates the need for reciprocity. Reciprocity implies that the burden of economic adjustment - regaining competiveness - is not shouldered by one set of partners only. Economically it is not rational to do that; socially and politically it is disruptive.

Pisani-Ferry's reasoning can be extrapolated to a larger set of structural imbalances in the EU. We believe that achieving reciprocity, so conceived, is a fundamental condition for the long-term viability of the Union. We deliberately coined our proposal for a Europe-wide social investment approach "a European social investment pact", not because we are so keen to see yet another "pact" emerging, but because the notion of a "pact" underscores the sense of reciprocity embedded in the proposed strategy.

In its flow dimension the social investment perspective is different - wider - than traditional human capital policies.

Moreover, social investment and protection are complementary, as we emphasise elsewhere. However, to the extent that deficits in social investment explain, at least in part, the current disequilibria in the EU, we need more social investment, not less. Moreover, together with the intrinsic value of social protection and care, the social investment perspective may offer a substantive definition of the European social purpose, a purpose which must be defined if we are to achieve the long-term sustainability of the eurozone and thus of the EU.

The argument we deployed is macroeconomic, but obviously there is a political corollary. European integration can only be maintained if citizens support it. 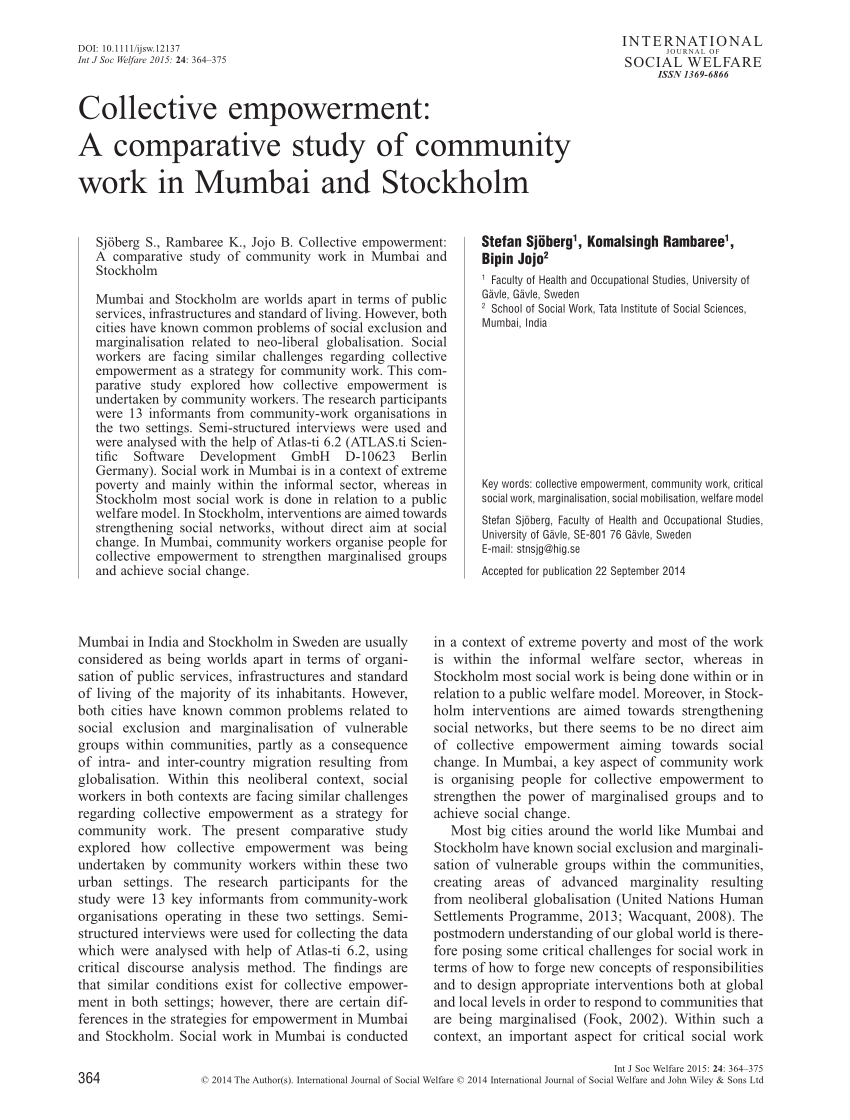 In Europe this is conditional on popular trust in governments able to handle the social consequences of the crisis in an interdependent world. Currently we witness a strong backlash against what is seen as "the EU's policies" as if there were no national governments determining the EU's action , notably in Greece and France, but also in Germany, the United Kingdom and the Netherlands. Between rising anti-austerity national protests and the EU's demand for fiscal consolidation, a political vacuum has emerged at the heart of the integration project.

In some countries, such as France, the response to this malaise was democratic alternance, which now opens the possiblility of a broad European compromise between Social Democrats, Christian Democrats and Liberals. In other countries the vacuum may be filled by increasing fragmentation and anti-EU populism. The trend towards anti-EU populism on both the left and the right is certainly not new. Already before , middle class fears of falling behind invoked a nostalgic narrative of a "golden-age" welfare paradise lost, pitted very much against the alleged globalising ambitions of the EU.

Again, this underscores the need for another social narrative, adapted to today's challenges and aligning European and domestic perspectives.

Challenges to the Swedish Welfare State

In policy terms, the challenge is to make long-term social investments and medium-term fiscal consolidation mutually supportive and sustainable under improved financial and economic governance. In political terms, European citizens need a reformist perspective that gives the social acquis they cherish a credible future.

At this critical juncture, it is therefore important not to discount the massive achievements of over half a century of European integration and welfare state development. The unprecedented deepening and widening of regional integration from six to twenty-seven member states, creating a community of some million people, was accompanied by the expansion of comprehensive welfare systems, while promoting democracy and securing peace, to an extent barely conceivable at the start of post-war reconstruction.

A social investment pact could be an important step towards a "caring Europe", based on a virtuous circle of efficient domestic solidarity and trusted European solidarity. Ascoli, C. Barbier, J. Beckfield, G. Bonoli and J. Esping-Andersen with D. Gallie , A. Hemerijck , J. Myles eds. Esping-Andersen , S. Sabel , A. Saxenian , R.